Two years ago, my son Eric was rushed to the hospital. He was in acute care for two weeks. I went to visit him twice a day. To alleviate my own anxiety before and after each visit I would go for an hour long walk. On one of those walks, I discovered Croft Street.

The name is a misnomer. Croft Street is really just a very wide lane way. Running from College to Harbord, just over 1km, it has been around for over a century. It is named for John Croft, counted as the only official fatality of the Great Toronto Fire of 1904. However, Croft actually died while clearing ruins after the fire.

An explosives expert, it was tragic irony that John Croft was killed as he tried to repair the fuse of a faulty charge he had set. A plaque at the foot of Croft Street provides details, and a beautiful mural dedicated to him graces the opposite side of the lane. 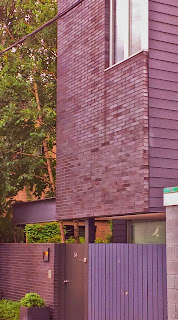 While Croft St is lined mostly with garages, there are also several well-loved homes in what used to be coach houses, stables, and workman's cottages.

Architecturally, especially at its southernmost end, it is fascinating.

A fully serviced street, with garbage collection, snow plowing, etc. it is a great example of urban and lane way development 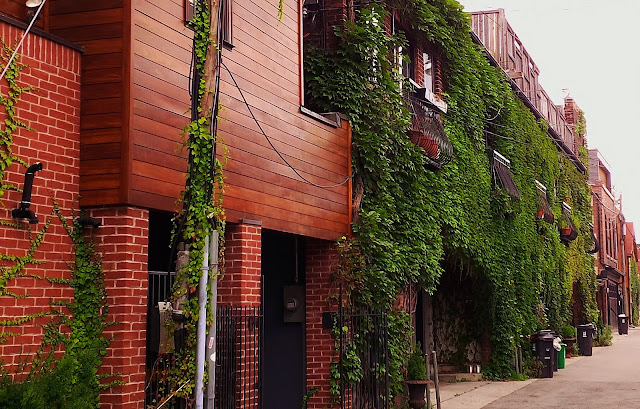 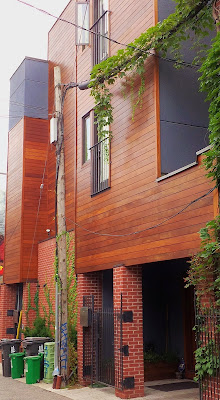 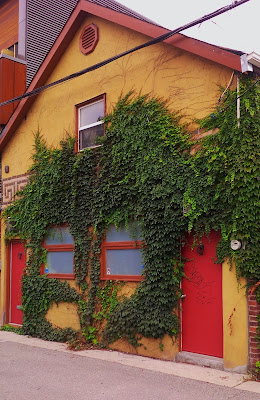 What truly caught me, and soothed me during such a tumultuous time in my life, was the abundance of street art-aka graffiti.The incredible talent unleashed, and encouraged, along Croft St floored me. I was curious so I looked into it. In 2006 a bylaw was enacted to 'counteract' graffiti, making property owners (business and residential) responsible for immediate removal of all graffiti, meaning the 'victim' paid the penalty for the crime. It came about that some property owners were not averse to the art on their walls, but did object to being forced to remove it, and to do so at their own expense.  In 2011, a combined Police, Government and Social Service  project brought about changes to The City of Toronto's Graffiti Bylaw.

The original bylaw defined graffiti as:


"one or more letters, symbols, figures, etchings, scratches, inscriptions, stains or other markings that disfigure or deface a structure or thing, howsoever made or otherwise affixed on the structure of a thing, but, for greater certainty, does not include an art mural."

Realising that some of the graffiti out there truly was ART and that artists rarely marred another's work, the 3 municipal services took advantage of the last six words and brought forth an amendment to bylaw.

City of Toronto Municipal Code, Chapter 485, Graffiti, has been amended to reflect the new Graffiti Management Plan and to include exemptions for Graffiti art which is a legal and acceptable form of street art and is differentiated from "tagging" which is generally characterised by writing and with the act of vandalism.

Graffiti Art is defined as markings made or affixed to properties that are approved by the property owner or occupant, where the markings aesthetically enhance the surface they cover and the general surroundings, having regard to the community character and standards.

Graffiti Vandalism is defined as any deliberate markings made or affixed on property that is not currently exempted or regularised by the Graffiti Panel, Executive Director or Council and: was made or affixed without permission of the owner; is considered to be a tag; for which there are reasonable grounds to believe that it may incite hatred or violence against any person or identifiable group; or contains profane vulgar or offensive language.

Several community agencies jumped at the chance to give a LEGAL creative outlet to street artists, and murals now beautify railway underpasses, stark industrial spaces, eventually leading to paid commissions for artwork to adorn commercial store fronts. Stores like The BombShelter (aka One Sixty Six A), a short walk from Croft St, could now legally supply proper materials for street art, free from harassment. The City of Toronto even created a registry of Street Artists, StArt for short, for those interested in hiring them!

Now where do you think they decided to 'launch' the amendment?


Croft St had already been a mecca for Street Artists. Located in a very open and artsy part of Toronto, residents had long painted their garages white, making them perfect canvasses for the artists.

The area is so well known for its extraordinary street art that the (IN)famous UK-based Banksy created at least 3 works in the immediate area, including one directly across from The BombShelter


With a history like Croft St's, it was a no-brainer as the spot to officially launch the new amendment. Street artists now work without fear of arrest and the 'victims' aren't forced to remove the art they appreciate.

Two years ago, when I discovered Croft St, I was at an extremely low point in my life. Worry and fear for my son gripped me constantly. My life had become a constant battle to ensure he was adequately cared for. Croft St allowed me to escape. Allowed me to be ME, devoid of stress and worry, even if just for those few minutes it took to stroll the lane. I took pictures from time to time during those two weeks, and I look to them often to remind me that even when life is dark, very dark, there is always something beautiful to help pull you through. You just have to be open to finding it.

it's very beautiful! I can't imagine a person that would call this a kind od vandalism! http://bigessaywriter.com/blog/graffiti-wall-art-or-act-of-vandalism can explain you the difference between art and vandalism!