The Paths We Travel

High Park and the Paths We Travel 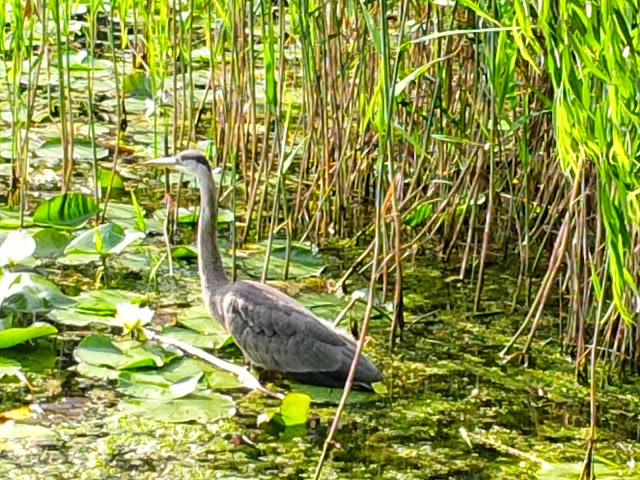 One of the few things every human being has in common is their exposure to stress. It comes in different forms and levels for all of us, but nonetheless we all feel its effects. Physically or mentally stress left unchecked takes its toll so we each must find our own ways of handling and minimizing it. Live music, and the arts in general, work like magic for me, but are not available 24/7. And stress knows no time-line. So recently I started to re-visit an old childhood hangout of mine. High Park. 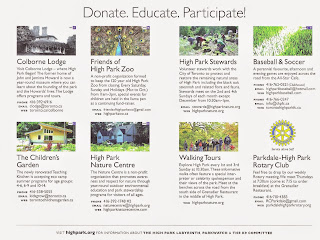 The property was originally owned by John Howard, Toronto's first surveyor. Howard named his estate,  purchased in 1836, 'High Park' because of the stunning view of Lake Ontario. In 1873 Howard deeded the 400 acre property to the city of Toronto. The Estate home, 'Colborne Lodge' remains as a museum. Filled with sporting facilities, Shakespeare In The Park, educational and ecological facilities, a restaurant, gardens,  playgrounds, a zoo, a large pond, a nature reserve, including a rare oak savannah, the celebrated Sakura Project, with over 2000 Japanese Cherry trees donated to Toronto from Japan, and much much more. High Park is the largest park within Toronto, a mecca for joggers, anglers, photographers, families, young lovers, and those seeking stress relief, like me.


As a child, I came here often with my father. We'd fish off the dock, take a ride in the paddle boats (long gone) then have lunch or dinner on the patio at Grenadier Restaurant. When my boys were small it was natural for me to bring them here as well. They'd chase chipmunks through the trails, visit their favourite animals in the zoo, and spend hours in the castle themed playground. As Eric, my autistic son, grew older, he became more difficult to manage in public. At times he could put himself or others into great danger. So we stopped going. Eric eventually stabilized, but in the meantime, other family activities had become our go-to's. Sadly, its been many years since I partook in the calming effects of High Park.

My other 2 sons now make the trek to High Park independently quite often. Riding their bikes or taking public transit it is somewhere they go to unwind and have fun. During the last 3 years, Eric had entered into crisis, and my own stress levels were assessed as similar to that of a front line soldier. I had to do something to lower them or I would surely collapse physically or emotionally. So I took a cue from my boys and rediscovered High Park. I made a point of going for a walk through the trails at least a couple of times per week.
It has been a life saver.


A week ago, I decided to chronicle the path I travel in pictures. I discovered not just calming relief from major stress, but important lessons about life, and being a mother as well. 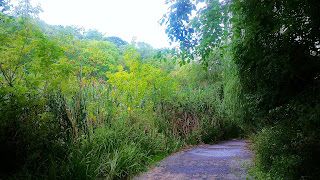 I begin my daily walk by descending from the parking lot down a steep but beautiful trail alongside a trickling brook. At the bottom I turn right and within a few steps I am swallowed up by Mother Nature. The trail, like life, begins full and vibrant, but fraught with unknown. 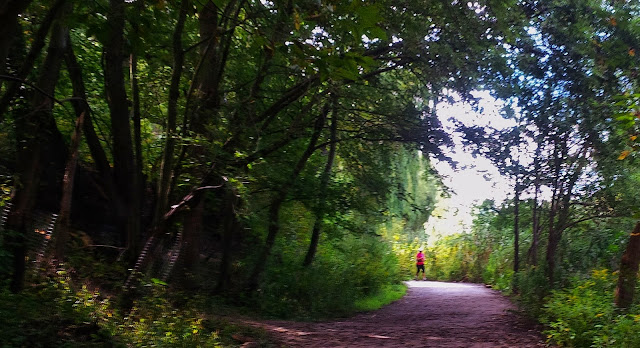 Although this is a path I am traveling on my own, I am never alone.
Joggers, dog owners, couples young and old, and solace seekers like myself pass by every few minutes. For the most part, everyone acknowledges each other. With some it is a warm greeting, a shared recognition. For others it is a nod, a simple hello. Sometimes they are people I shall never see again, and other times good friends. 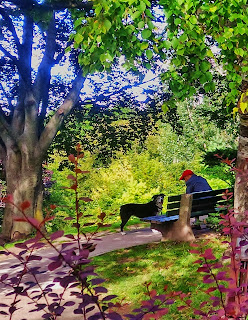 Just as the path seems darkest, as you start to wonder if you are lost, or if you will ever emerge, the foliage breaks. Flowers bloom and you begin to see the northern most section of Grenadier Pond. Kept as a natural habitat it is the nesting place to one of two pairs of swans that call High Park their home. Both had sets had cygnets earlier this summer. This first pair lost 3 of their 4 when they were quite small. Only the 'runt' remained. Each day as I travel by I watch and pray that the last one was still there. As my autistic son struggled so bravely through his own crisis I would watch this one last baby swan defy the odds and thrive. And I would pray for the same for my own baby. I watch as Mommy and Daddy swan become over-protective of this cygnet, never allowing him out of their sights, never more than a few feet from them. Am I doing this with my son? I make note and force myself to curb that protective instinct and allow my baby his moment to fly. There will come a day when I am no longer here to look after him, and I need to prepare him for that, not avoid it. 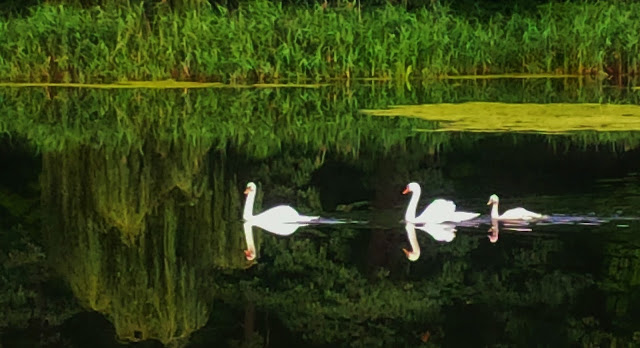 Early on this summer, Toronto had an unexpected torrential rain storm, dropping more rain in the space of an hour than the devastating Hurricane Hazel did in 1954. Mass flooding everywhere. People had to be rescued from commuter trains by boat. High Park did not escape damage. These trees were toppled by the storm. Yet they continue to grow. The roots that were yanked so traumatically from the soil have dug themselves back in. Ducks have started nesting beneath the canopy of trunks and branches. Eventually, the uprooted soil will gain a protective layer of plant life. These trees didn't complain about their life being torn asunder. They simply found a way to survive. Each day as I pass I am inspired by these trees, and in particular their roots. If you have strong roots, you will make it through the worst of storms. 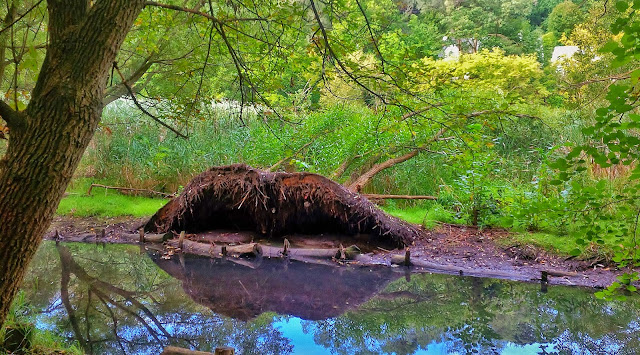 It is at this point that I stop, breathe, then turn around and retrace my steps. I smile at the people I pass and root for the baby swan. Eventually I come to the beginning of this particular trail and start down another path. 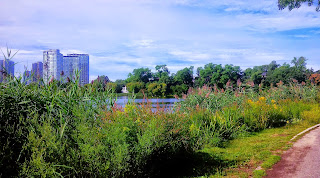 As I enter onto this path, with a more open, panoramic view, I can't help but compare it to my life now. I have a much more balanced view of things, the dark periods don't overwhelm, I can always see a bright spot around the corner. The second set of swans calls this section of Grenadier Pond their home. They had but 2 cygnets. Both much bigger and stronger than the sheltered baby at the other end of the park. One has already flown off to start his own life, and one remains, however, QUITE independent of his Mama and Papa. You rarely see them as a full family unit. He reminds me of my teenagers! 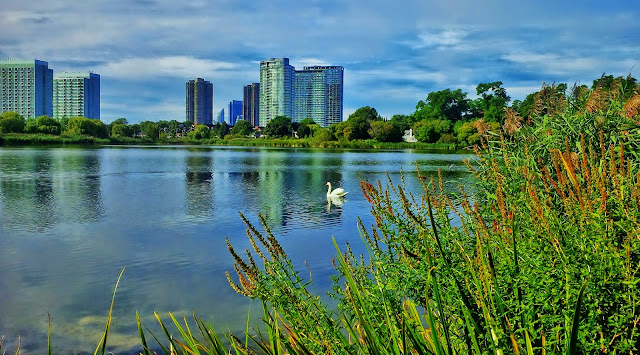 As I round the curve I hit the southernmost part of High Park. To my left I can still see the gorgeous abundance of nature, however a main local transit line, a commuter train line, a freeway and a highway all are to my right. This effectively forces me back into the present.

I often bump into the second pair of swans here. They are much more urban than the other set. They are not concerned with people, traffic or anything at all but themselves. They are beautiful, and accessible, but somehow remote.  This pair even though out and about regularly 'in the real world' are completely disconnected. I feel much more connected to the pair at the far end of the pond. Though feeling the loss of their babies and seemingly isolated by their habitat and circumstance, they seem, well, free-er. 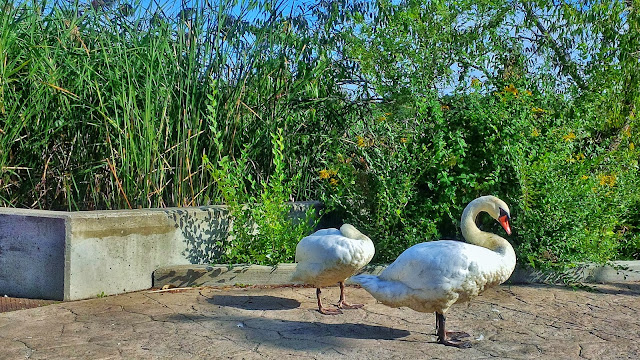 This is usually where I turn around, but on nice summer days I instead cross the street and take a walk on Sunnyside Beach. I often bump into my niece and her 2 young sons here. When my boys were small, this particular niece often babysat. She was there for fun wonderful moments and she was there when I collapsed. She did not have an easy start, but she has built a wonderful life and family. So when I see her and her handsome boys at the end of a long long trail, I feel a warmth I cannot begin to describe. They are moments I cherish.


Once again I turn, retrace my steps, then start on yet another trail as I make my way back home. Gardens and fountains grace the path. 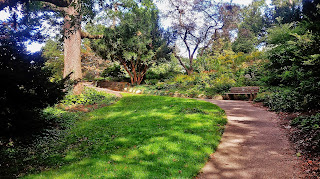 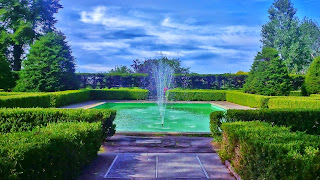 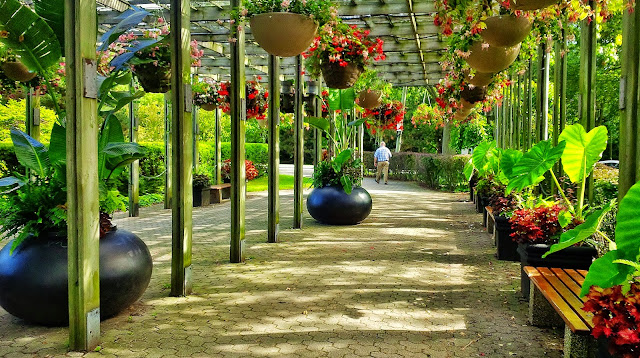 As I reach the end of my daily travels, I often stop to enjoy a coffee in the same restaurant that my late father brought me to as a small child. The decor remains the same and the memories caress my heart the moment I walk through the doors.

I am reminded of all the wonderful moments past.
I am refreshed, rejuvenated, blood pumping though my veins from the workout.
I am ready for anything to come.