Daddy as a young man at Fisherman's Bay

A few weeks from now will mark the 24th anniversary of my father's death. Remembering losing him is still so painfully raw that I usually chose to remember only his life not his death. But in the last few years I have come to understand his death was as much a part of his wonderful affect on me as his life and parenting.

The best way to describe my father is to recount how he was with my brother Phillip. Phil had a bout of pneumonia as a baby in the 1950s and stopped breathing, suffering extreme brain damage. He never spoke or learned personal care- was severely challenged and labelled as "severely mentally retarded". I can still picture Daddy, in the very early 1970s, when men had to be seen to be MEN, were not active participants in their families lives, and developmentally challenged people were hidden away, taking my by then adult brother and going for regular walks around the neighbourhood, HOLDING HIS HAND to keep him safe. He was proud to be a dad, and very proud of each and every one of us.(And his masses of grandchildren and great grandchildren too!) . He was a man ahead of his time, and his values and sense of humour were ingrained in the hearts of everyone who met him. He could be in a room full of people, and he would manage to make each one feel they were the most important person there.

He had to leave school in grade 6 during the Depression to go to work to help support his family (GRADE 6!) but he never lost his passion for knowledge and education. Everyone who met him as an adult always assumed he had a university degree of some sort. His health was precarious his whole life, having a rare lung disorder that is tantamount to having pneumonia every day of his life, but he never let it stop him. I've heard stories of Daddy having his brothers carry him in to work during particularly bad pneumonia spells, so that he wouldn't miss a day of work. It was the depression and his family needed the income whether his body was up to it or not. Family always was the most important thing in the world to my dad. As a sapper during the war, he would send his entire living allowance home to his Mom and play darts or pool (yes, he was a pool shark lol!) to pay for cigarettes etc. He'd rather chance going without himself than deny his family back home the extra help.

When my Daddy came back from the war it wasn't long before he met my Mom and the two of them embarked on the journey that would become The Pollard Family. It was a long journey, because, as you see, I am the youngest of nine. There is a huge gap between myself and the others. I was a surprise package (ACTUALLY, the doctors 'misdiagnosed' my mother, they told her she was in menopause and had a tumor. Luckily my Dad asked for a second opinion because that tumor was ME!). My father always made sure I knew I was not an accident, but rather a wonderful gift. 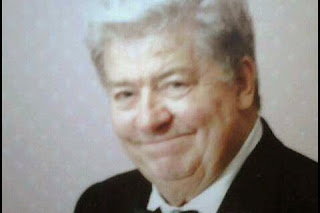 Daddy on the morning of my wedding

Daddy held on long enough to see me become an adult. He suffered the first crushing pains of his final heart attack while he walked me down the aisle at my wedding. You wouldn't have known it. All you would have seen was the pride on his face as he walked arm and arm with his "princess".
He never said a word. Silently endured the pain. He was rushed to the hospital after I left the reception. He had hidden his physical pain from everyone around him, just so that his family could have a beautiful day. He was that selfless. I never saw him alive again. My last memories of him are beautiful, picture perfect, and the epitome of a parents love.

THAT was my Daddy.